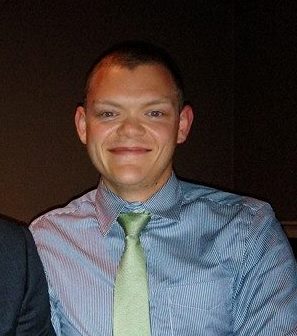 Nate started at Teen Feed in March 2014.  Calm, laid-back, and very approachable, Nate volunteers as an Advocate every Wednesday night, building strong relationships and trust with the youth we serve. Born and raised in Federal Way and educated at the University of Washington in Seattle, Nate spent a summer in San Francisco as an intern after college.  His favorite hobbies include backpacking and working on a classic car with his dad.  These were important factors that brought him back to Seattle, where he has lived ever since.

Join us as we celebrate Nate in our Volunteer Spotlight!

When did you start at Teen Feed?  What inspired you to volunteer with us?

One of my colleagues, who had been a Volunteer Advocate for over a year, suggested that I look into Teen Feed.  She really sold it as a good organization to work for and be a part of.  She told me that if a guest wants to get very personal and you are comfortable getting personal and discussing life, politics, and happenings, you can do that.  And for me that was something that was really interesting.  That’s pretty unique to have that type of opportunity, from a people perspective.  And that’s why Advocates are there —just, from person to person, somebody to confide in a little bit.  That was exciting to me.  So, not only did it fit into my schedule, it sounded like really good fit.

What was your impression of Teen Feed when you started?

I was really nervous.  I thought it would be kind of hectic.  I found myself thinking that I would be really impersonal or something with guests.  I wasn’t expecting them to be as laid-back as many of them are: happy to be there, happy to chat, and happy to have a meal with volunteers and staff.

Obviously, those were misconceptions, because it turned into being a very relaxed environment — kind of free-flowing.  It’s a nice environment to spend time in. I didn’t foresee that.

Early on I attended The Ropes training, which was run by Teen Feed staff members.  It really opened my eyes to some of the day to day struggles that guests go through. When you are meeting them on a week to week basis it’s hard to put those experiences into an idea of what an entire day looks like. You’ll get an off-hand event here and there, but at The Ropes they give you an idea of what a day could be like, you know, from the perspective of the guests who we work with.

We love food here at Teen Feed.  What did you eat today?

Breakfast is always exactly the same for me, which is weird — waffles with peanut butter and honey.  For lunch today I had Pad Thai with tofu, from a food truck in South Lake Union. It was my first time trying it.  I walked through the cross street close to my work, looked to my right, and was like, “I might as well try that today.”  I’d go back.  It’s close. Two blocks away from my work.

How does volunteering at Teen Feed affect other parts of your life?

Living in Capitol Hill, I have a lot of exposure to a community of folks that have unstable housing or who might identify as homeless altogether.  Prior to volunteering at Teen Feed, I hadn’t talked with anyone in those communities who struggle with some of the issues that they struggle with. As a volunteer, your perspective changes.  I’m less judgmental than I might have been in college and in the first couple years out of college.  I’m much more likely to stop and talk to somebody.  A lot of people in that community appreciate being acknowledged and being talked to on a person-to-person level.  A lot of the time they don’t get that — the respect, I guess.

What is your favorite meal you have had at Teen Feed?

I personally like the bean and rice burritos that come with salsa and chips.  That’s kind of up my alley.  I think that’s the University Congregational United Church of Christ Meal Team.  I think they’re probably the meal team tonight, actually.  When you volunteer on the same night every week, you get into a consistent group with four or five meal teams.

What advice would you give to new volunteers?

I’d suggest you shadow a veteran Advocate when you first start.  Sit back and get that Advocate’s opinion on how they open conversations. A lot of Advocates look at it differently from one person to the other.  So really finding your comfort level and the way that you want to engage with youth or guests is important.  It definitely takes a couple weeks for that to happen.  I would also say, don’t get discouraged, if you get blown off or somebody you’re talking to is having a bad day.  That is something that is very normal for somebody that’s in such a stressful situation.  They might just want to keep to themselves over the meal.  I realize that as an Advocate, I could probably find myself in those same shoes once a week— just being upset with something and not wanting to talk to people.  But yeah, shadowing an Advocate and having the perspective that it’s nothing personal. It’s just the way things go sometimes.

I would say.  I’m very thankful that I got involved.  And I think the trainings that were offered and what the staff did to help onboard me as an Advocate was really top-notch.  They’re just a super friendly bunch and very easy to work with. What’s interesting is that the people that you meet that are also working as Advocates or working as case manager staff, they’re just great people to meet, network with, and be around on a weekly basis.  That creates the good environment that Teen Feed strives for.

← United We Serve: MLK Day Volunteers at Work!
Haircuts for Youth in the University District →